Well, I’ve been back at the day job for a week now and my summer holiday seems like a distant memory. So before it stretches back any further, I thought I should post some of the cultural highlights from our two weeks away.

First up, we stumbled across the Bubble Car Museum when in Lincolnshire, and what a find. I wasn’t sure what to expect, and all I really hoped was that they had a Bond Bug, because I had a Dinky toy version as a little boy. But it has to be said, this was a gem of a little museum. 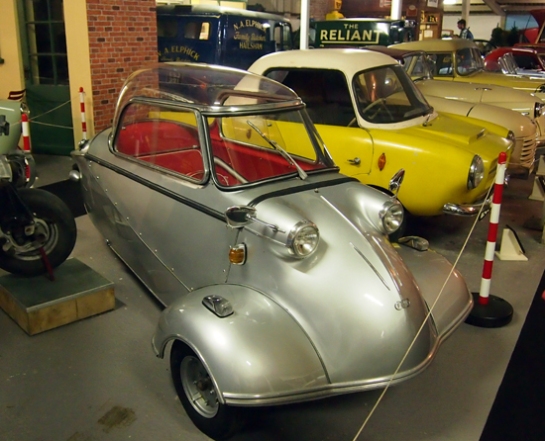 From the outside the museum looked like a small shed, and I half expected to just see a few rusting, half refurbished cars. But no, the place was rammed with these amazing vehicles. There was something optimistic about these 700cc or less cars and bikes—futuristic and weirdly beautiful. And the museum curators had done an excellent job of displaying them all, trying to put them into context with mock-ups of 1950s shop fronts, front rooms and kitchens around the two exhibition rooms.

This museum is highly recommended and it has a great little no nonsense cafe with adjoining campsite. I think we might be bringing the tent next time we visit Lincolnshire.

On the drive home, as mentioned here, we went via the north Norfolk coast. Having holidayed there for several summers we stopped off in Cley-Next-the-Sea hoping to catch their summer art exhibition, Cley 13, usually held in the village church. This year in a field next to the graveyard, as we approached the church, we were greeted by these wonderful bird sculptures. 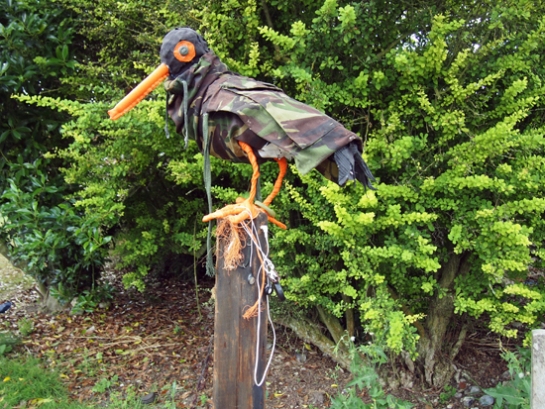 Created by artist Jessica Perry and the children of Stalham High School, they certainly grabbed your attention. And while there was interesting work on display in the church, it is very much like a very well crafted and presented college foundation course end of year show. Good, but not exactly challenging.  However, these birds were just fun and unpretentious and as a result blew everything else away.

We took a couple days out in London in the second week of our holiday. We were lucky enough to have been bought membership of the Royal Academy as a present so decided to check out the Summer Show for the first time. As I’d only ever seen it on TV before, it was interesting to see it in the flesh, but ultimately, it is a difficult thing to review, what with so much on show. However, it was quite a good way to assess your tastes, as we ended up just looking at what immediately grabbed our attention. With most exhibitions we go to being themed or of a single artist/designer, just letting your instincts and knee-jerk judgements kick in was refreshing, and almost the only way to react to such an overwhelming display of work. I found several pieces that I really liked, but equally was surprised by many of the entries being allow in. An ultimate favourite for me though had to be the Greyson Perry tapestries, most of which were created in response to his TV programme on taste. Seeing them in their full glory, and being able to concentrate of their detail and the narrative they told, only went to confirm my opinion that the man is an illustrator rather than a fine artist, especially with his work deviating from pottery.

While at the RA, we also took the opportunity to see the Mexico: A Revolution in Art 1910–1940, which I loved. It hadn’t had great reviews, but the fact it was a mix of painting and photography, I thought made it a strong documentary on the the changes and difficulties that Mexico faced during this time period.

While in London, we also took in the Ibrahim El-Salahi exhibition, some of who’s drawings blew me away. This was shown alongside Meschac Gaba’s Museum of Contemporary African Art, which was sort of a museum within a gallery.

Gaba’s show was really refreshing, not least because you were allowed to take photographs. Gaba wants to challenge the notion of what a museum/gallery should be, and over the years adds new ‘rooms’ to this travelling show, encourages audience participation, (in the first room there was a large Jenga type game for people to interact with), and showcases his life and work as part of the show, (he even had large scale photographs of his wedding and wedding gifts on display as an exhibit!). I wasn’t overly impressed with his individual pieces of work, with its over reliance on symbolism and a sense of having seen similar approaches done much better, but then the Museum has become an artwork in its own right. As a whole, it is definitely greater than the sum of its parts. And what he is trying to achieve with challenging the notion of an exhibition was a joy to behold and completely refreshing.

Just the fact that I’m able to publish photographs here that I took in the exhibition, and couldn’t photograph anything and publish it here form the, arguable much stronger, El-Salahi show, is testament to breath of fresh air this approach filled me with. Why can’t you take (non-flash) photographs in exhibitions? I’ve always thought it was fucking rediculous.

Lastly, while in London, we met up with Claire’s daughter and they both went off to watch a show at The Globe, which was a present from Callie to her mother for her birthday. So I took myself off the Design Museum. It was a shame because the whole place felt like it was winding down, readying itself for its move across London to its new building in 2014/15. But despite there being an air of the place being unloved, the Future Is Here exhibition was genuinely interesting, once I got my head around what it was about. It basically gathers together examples of new ways of working and designing/producing goods, including crowdsourcing ideas, 3D printing, producing construction materials on a building site, and small scale robot construction. These themes and exhibits, when taken collectively, demonstrated how manufacturing processes are changing around us and how new methods of industry were being formed in the now. The Design Museum was half proposing we are in times of a new industrial revolution, and while I’m not completely convinced, it was a thought provoking experience.

As if to reinforce the feeling that the museum is ‘winding down’, it had on display items from its collection themed into six categories rather than the usual second commissioned exhibition. While it is good to see this work coming out of the closet, and promises much for the new bigger space the museum will have in Kensington, (with some of their collection being on permanent display), it did give the impression that energies and finances were being diverted elsewhere. That said, I naturally made a beeline for the graphic design section, and it was good to see Calvert and Kinneir‘s road signage templates:

and the Design Research Unit‘s branding guidelines for British Rail: 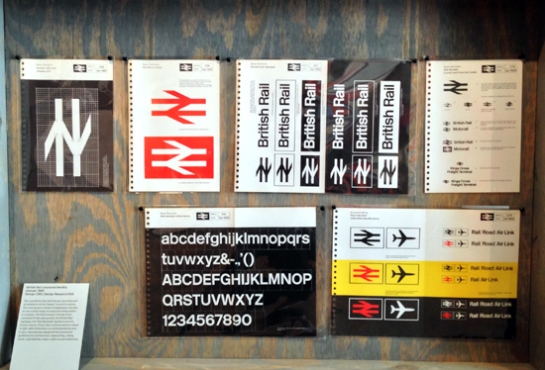