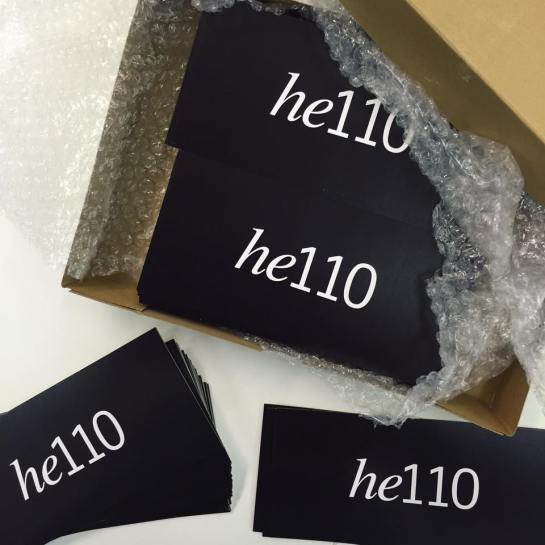 Degree show time is upon us, and this year the Graphic Design and Graphic Illustration students from UCS Ipswich have branded their show he110 after the studio number R110 they’ve been working in for the last 3 years.

This year the graphics students have been busy marketing their show and are posting daily on their Twitter, Instagram and Facebook profiles. They’ve also launched their own he110 website with links to their personal portfolio sites.

Graphic Design and Graphic Illustration students are exhibiting alongside other degree courses: Computer Games Design; Dance; English; Fine Art; Digital Film Production; Interior Architecture and Design; and Photography. The Photography degree show is on in the UCS Waterfront Building until 8 June before going to Free Range in London.

PhotoEast, Suffolk’s first festival of photography, was launched this week in Ipswich and can claim to be a major success, even within its first few days of existence. The half-mile walk along Ipswich’s waterfront from DanceEast to Cult Cafe brings dramatic images from around the world to this small Suffolk town. Local history and Ipswich life are presented alongside contemporary photography as part of the fabric of the waterside architecture. There is even a projection room inside a shipping container at the far end of the marina. 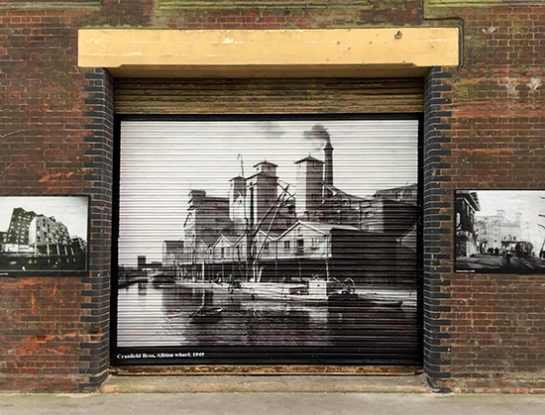 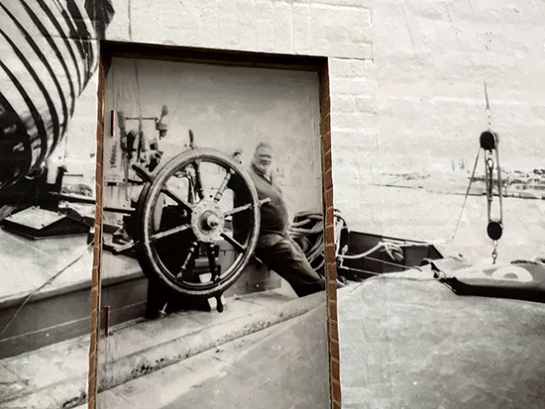 Further to the monumental quayside exhibitions, two poignant projects looking at ageing and the family by Zed Nelson and Julian Germain are displayed in UCS’s Waterfront Gallery. Alongside these keynote exhibitions, the BA (Hons) Photography degree show in the UCS Waterfront Building lobby showcases the next generation of photographers emerging from the region; while a PhotoEast Young Person’s Fellowship exhibition of local school and college students’ work is on display in the nearby Arts Building. 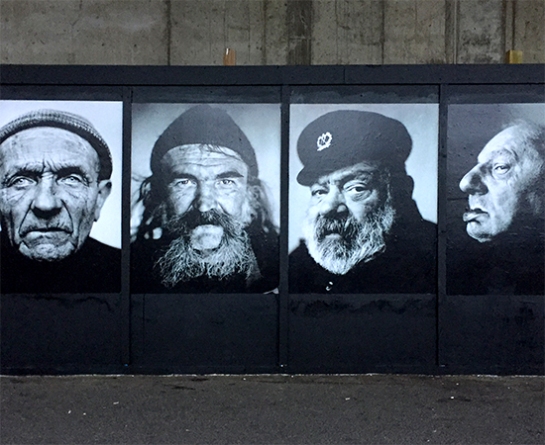 While walking around the quayside several times this week it has been hard not to notice a buzz in the air that this very public exhibition has brought to the town. Listening in to the conversations of teenage skateboarders making their way home from the local skatepark as they discuss the images is as fascinating as the work itself. And you can watch the drama of some of the photographs stopping people in their tracks in order to contemplate and comprehend what they are looking at.

Accompanying the exhibition is a one-day series of talks. This morning Claire and I went to hear the Picture Editor of The Guardian, Fiona Shields, talk about the challenging job of choosing the right image to illustrate a news story from some of the 25,000 pictures she looks at everyday! This afternoon we are heading back into a lecture theatre to hear George Georgiou discuss his commissioned project of photographing Ipswich from the top deck of a bus. In-between these there is a programme of talks from Mark Edwards, the Course Leader for the Photography degree course at UCS Ipswich; social documentary photographer Julian Germain will discuss his work in the Waterfront Gallery; and curator Katie Barron is in discussion with Chloe Dewe-Mathews about her WW1 tribute Shot At Dawn. The scale and breadth of this festival, both aesthetically and cerebrally, is truly impressive. 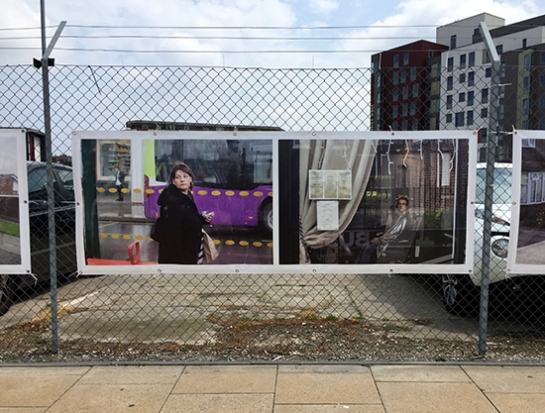 The festival continues in Halesworth and various other venues along the A12 towards Lowestoft. Tomorrow Claire and I plan to visit an exhibition of Rodchenko’s photographs in a garden nursery at Darsham, and People and Their Dogs at The Cut in Halesworth. PhotoEast organisers are hoping to host exhibitions in more towns throughout the region as the festival develops over time. 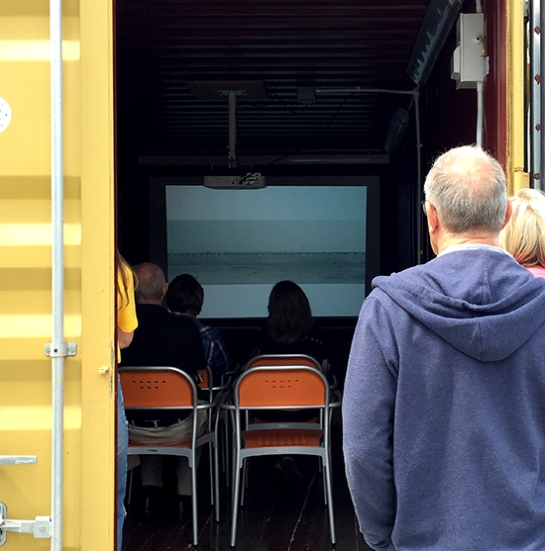 In considering what has made this festival so successful there are three key ingredients which need to be taken into account. Firstly, the calibre of the work on show is extremely high, a parochial exhibition of sunsets this is not! Secondly, the presentation is what you would expect from any metropolitan gallery or major arts event. Thirdly, the festival branding brings all the disparate aspects of the festival together with a cohesive graphic unity. If any one of these parts was not as fully considered as they have been I am in no doubt the sum total would have suffered as a result. PhotoEast is evidence of just how to put on a culturally exciting and vibrant arts event in a small town that engages local audiences well beyond their geographical boundaries.

Congratulations to the organisers for their vision, to all those involved at UCS, and to all the sponsors and supporters for helping to make this happen. PhotoEast 2016 continues until 25 June across various venues in the region. Check out the PhotoEast website for more details.

Third year Graphic Design and Graphic Illustration degree students at University Campus Suffolk, (UCS), are holding an online illustration auction in April. Work has been donated from international illustrators such as Alysha Dawn, Miles Cole, Büro Ufho, Anke Weckmann, and Jamie Mitchell with more coming in on a daily basis. You can view the lots received to date on their website blink.com.

The auction will be hosted on their website, with bids being accepted from 30 March, concluding on 6 April. All money raised will go towards their end of year degree show, due to be held in early June at UCS’s Waterfront Building in Ipswich, (more details to follow). 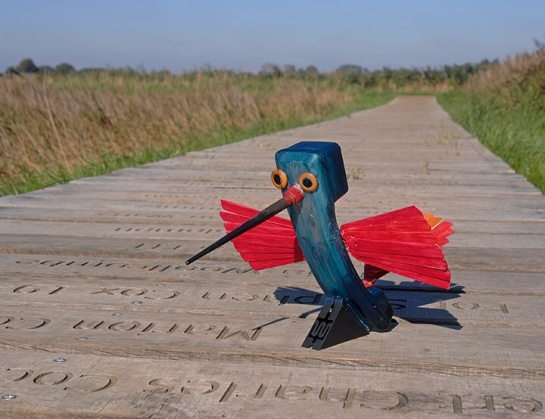 I popped up to Snape Maltings near Aldeburgh in Suffolk at the weekend to find two great, if small, exhibitions.

The first celebrates 15 years of Colchester based graphic design agency Silk Pearce‘s work for the annual Aldeburgh Music festival. Their branding of the festival and programme designs have often featured in design magazines such as Creative Review, and a large display of all of their programme covers collected together features as you enter the show. This is followed by many framed prints of artwork they’ve created over the years, featuring techniques including collage, photomontage, screenprints and digital illustration that reference many aspects of Snape and Aldeburgh. Often fun and full of wit, the work vibrantly shows a diverse approach to image making, and visually dispels any notion of Aldeburgh Music being po-faced as many similar ‘serious’ music festivals might come across. Whoever commissioned Silk Pearce 15 years ago made a wise decision, and the brief must be an annual joy for the studio to anticipate. 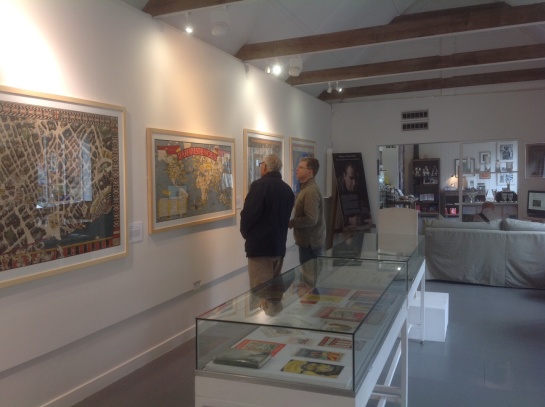 The second is an exhibition of the work of Max Gill, the younger brother of the more famous Eric Gill, at the Lettering & Commemorative Arts Trust‘s centre, also at Snape. The centre is worth a visit in its own right for the amazing letter craft, stone masonry and calligraphy on display, but Gill’s maps and book work are absolutely stunning in the main exhibition room. I was particularly taken with his Tea Revives The World map, being a big tea fan myself.

It is unusual enough to get exhibitions of Graphic Design anywhere, but the fact these exhibitions are on together is a rare treat. You’ll have to be quick to catch the Silk Pearce show as if finishes at the end of August, coinciding with the Aldeburgh Music Proms. The Gill exhibition is on until 12 November.

I’ve been admiring St Andrew’s church in Felixstowe every time I have walked or driven past it for a while now. Today, I finally went out of my way to take a closer look, and some pictures. 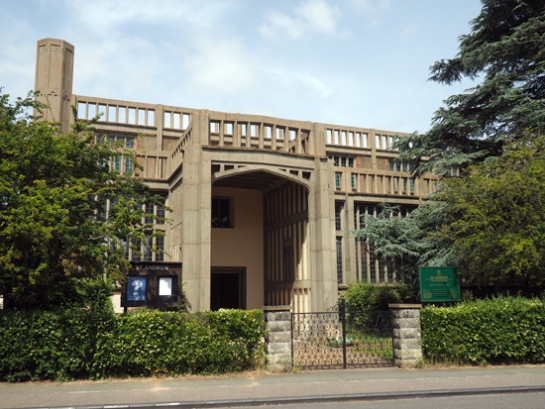 As a bit of a fan of concrete buildings my eye was drawn to St Andrew’s from afar, and as I got closer, it didn’t disappoint.

I assumed correctly that it was built circa 1930, as there is an Art Deco essence to it with the gridded balustrades and sharp geometric corners. After my foray, I did a little bit of searching on the Internet and discovered St Andrew’s was completed in 1930–31 by Hilda Mason and Raymond Erith. 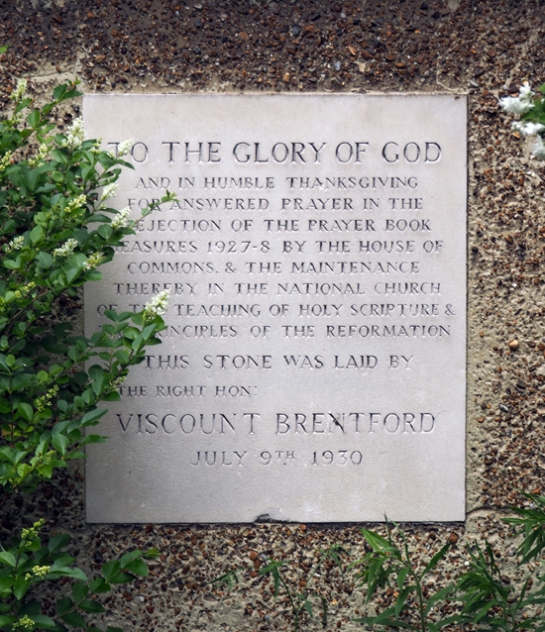 It is certainly an imposing figure, albeit one that has been softened by the Yew trees surrounding it. Interestingly, on closer inspection, you can see lots of other architectural influences. In the image below, if you replaced the concrete and pebble-dashing with timber beams & wattle and daub you would have what looked like a Tudor manor house. 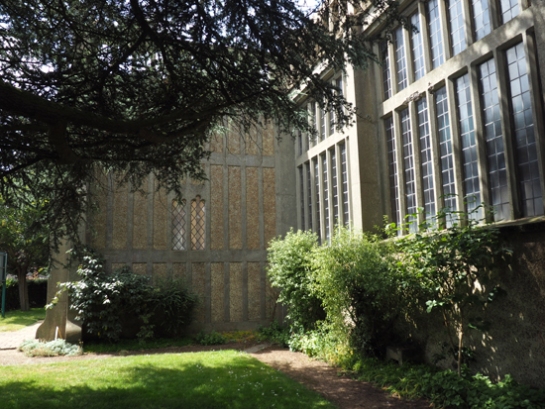 One of the most striking features in my opinion are the balustrades that top off the whole building giving a sense of a battlement or castle like structure. 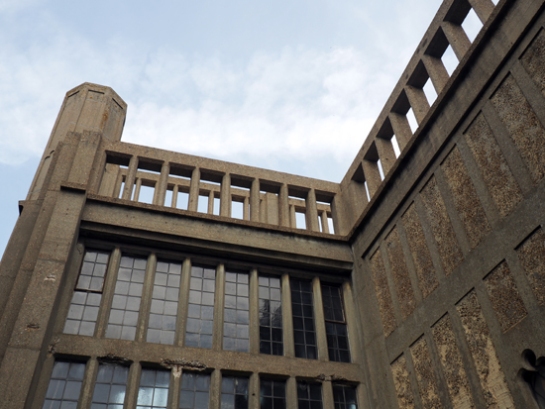 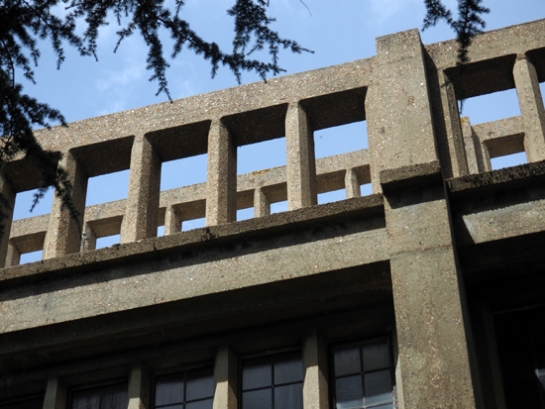 These Modern features, (for 1930), are then strangely augmented by more traditional big heavy oak doors.

A notable point that I’ve come across in my research is one of female architects and their associations with churches. In an article on the subject by Lynne Walker, St Andrew’s and Hilda Mason are featured extensively:

“The tradition of women as patrons of ecclesiastical buildings goes back to at least the middle ages. In the nineteenth century, the design of churches, their furnishings and decoration were considered appropriate for women, especially if they were built as a memorial to a family member or associated with the professional activities of a male family member. The design of churches reinforced the idea of women’s supposedly superior moral and spiritual nature. Like the design of houses, it could be viewed as associated with private unpaid ‘ladies’ accomplishments’ which were comfortably within the domestic sphere.

With professionalisation, churches continued to be a building type which attracted women’s design activities. Experimentation with concrete was a pre-war Arts and Crafts adventure, but it became a hallmark of modernism. St. Andrew’s Church in Felixstowe was designed in reinforced concrete by Hilda Mason (1880- 1955) in collaboration with Raymond Erith.

The Architectural Review called it: “The only English Church built in concrete—this is, in which concrete is used otherwise than as a cheap substitute for stone”. The construction was concrete frame with steel rods providing the tensile strength and concrete slabs made on the site (cavity brickwork). It was a church which the Architect & Building News, and its architects, believed welded “a logical and straight forward use of material to the strong fifteenth century tradition of East Anglia, such as Dedham, Lavenham, and Blythburgh”, although the tower, an important element of the composition was unexecuted. Erith’s superb drawing skills were put to good use in producing a set of presentation drawings for parish consumption which made the concrete church look more like a Suffolk parish church than it would ever do again.

Not surprisingly perhaps this unexpected building got a rough ride from the Church Commissioners’ architects, but Architectural Review supported St. Andrew’s as a “brave experiment that has the merit of combining structural sincerity with a genuine English feeling.” Hilda Mason anticipated that a connection with the Perrett’s concrete Church of Notre Dame, Le Raincy (1922-3) was, and is, inevitable. She feared that this would increase the unpopularity of her own church by association with architecture which was too innovative, foreign and Catholic.

Hilda Mason’s other major work was completely modernist, Kings Knoll, 1933, Woodbridge, a house for herself in the International Style.” 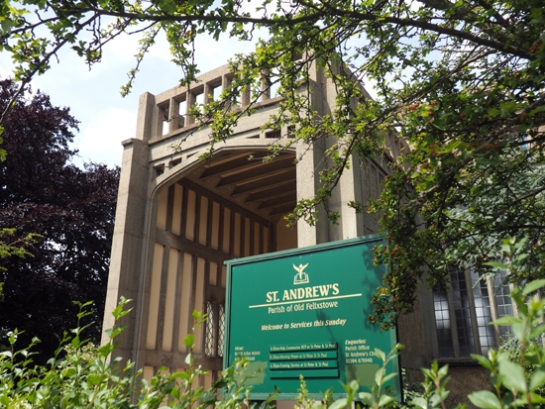 This now Grade II listed building is a fascinating hodgepodge of styles, one that bravely predates by many years postmodernist architects willingness to mix historical styles which was so forbidden by hardline Modernists.