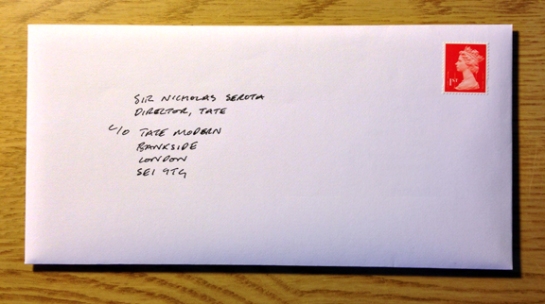 I have been a Tate member since 2005 and am writing to you regarding the recent disclosure in the media that the Tate employs people on what has been termed ‘zero-hours contracts’. As a Tate member, I feel that I am being complicit in an employment practice that I feel is unacceptable in 2013, and one that I am surprised that the Tate is actively involved in.

Not giving your employees guaranteed hours of employment, I believe, is a practice that should have been outlawed many years ago. I am sure you are aware of the many arguments against such contracts, but to state my opposition to them, I believe they give people on low incomes no security and forces them to live a hand-to-mouth existence. There is little chance of people employed on these contracts being able to find accommodation due to the lack of proof of a guaranteed income. Further to this, should they have legitimate reasons for turning down work, there are reports of people on such contracts fearing they will be marked down as being inflexible and risk losing future employment opportunities. As an organisation that I previously regarded as progressive, I am shocked to find that the Tate thinks this is an acceptable way to ‘reward’ its hard working staff and believe that it could potentially be regarded as an exploitative act, knowing how desperate some people are to work in the arts and how few job opportunities there are in this field.

As a graphic designer and arts based educator, just like you and your staff, I am employed in the creative industries. The UK based creative industries are globally respected and generate a vast wealth that feeds into the UK economy. Further to this, as a university lecturer, I discuss employment ethics with my students on a regular basis and have a strong personal interest in corporate social responsibility. As a result of this, I believe that employers in the creative sector have a responsibility to uphold this respect for all involved in the sector and to treat its workers fairly.

Because of my strong feelings about this issue, I find that my continued financial support of the Tate to be in conflict with my views. I have recently renewed my membership—I even increased it from a ‘Member + Guest’ to a ‘Member + Guest + Extra Card’—but had I been aware of the Tate’s use of ‘zero-hours contracts’ at the time, I would not have renewed it.

There is little I can do about my current membership. However, unless I learn that the Tate has stopped using these ethically questionable contracts before my current membership has run out, I will not be renewing it again. In the meantime, I will boycott cafes and bookshops at any of the Tate galleries that I visit over the coming year so as to not give further financial support to the Tate.