In reading Fiona MacCarthy’s overview of Bauhaus—the German design school, not the 1980s goth band—in yesterday’s Guardian, several thoughts came to mind, but none more so than that of the blinkered nature of design history. The premise of the article, written prior to the opening of the Bauhaus: Art as Life exhibition coming to the Barbican in May, is best summed up by its closing paragraph where MacCarthy states: “The Bauhaus revival could not be more timely. In a world in which idealism in design and architecture is in short supply, it is good to be reminded of this bold and beautiful experiment in bringing creativity alive.”

Well, it could be (wrongly) argued there is a lack of idealism in society in general, and on the surface of it, I agree, there doesn’t appear to be much idealism in design at the moment. However, that is on the surface. If you dig a little deeper, there are plenty of critical design thinkers and practitioners out there, just as there always have been. Unfortunately, they don’t get given enough media coverage outside of Eye magazine and design blogs for their thoughts and work to be taken note of.

Leaving talk of radicals such as Occupy Design to one side for the purposes of this post, one group of designers that I’ve been following recently that I believe do show an idealistic streak has been Government Digital Services (GDS). I first took notice while following Ben Terrett’s Noisy Decent Graphics blog. Terrett recently left Wieden+Kennedy, an advertising agency, to become head of design for GDS, a Government department looking at how digital services are delivered, and in no small way has announced that the GDS remit is as big as that of Margaret Calvert and Jock Kinnear, the designers that transformed the road signage system in the UK in 1950s. Terrett says: “Before they [Kinnear and Calvert] came along Britain was littered with different signage systems all using different symbols, colours and typefaces which was at best confusing and at worst dangerous. With an exponential increase in vehicle traffic the government knew something had to be done. Kinnear and Calvert proposed one consistent system. One designed with the clarity of information as it’s goal. From then on Britain had a solution that became the definitive standard and was copied around the world.” Bringing us back to 2012, Terrett goes on the state: “Sound familiar? Swap signage systems for websites. Swap vehicle traffic for online traffic.” Anyone who has used the navigation nightmare that is Directgov should be able to sympathise with this analogy. 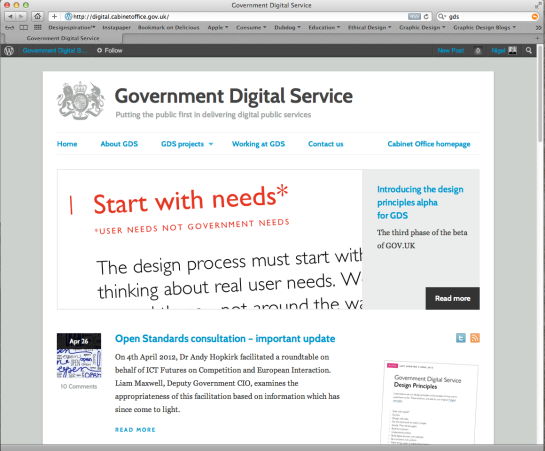 So, what are GDS doing? Well, firstly, they have set up a blog that details what they are up to. You can sign up for regular email updates that informs you of key developments, discussions and advances in their work. This, in itself, is fascinating, regardless of what they are doing, as you can witness the design process in action, which is extremely rare. One recent post discussed how the homeless access, and can make use of, digital services. This is an important consideration as more and more content is becoming embedded in online delivery, with fewer chances to access services through traditional methods. Therefore, how do those that are marginalised in our society get at what they need when they have limited means to be able to do so? These are important and interesting contemporary debates. But further to just being passive observers of this process of research and development, you, the person receiving the updates, are encouraged to give GDS feedback and get involved in the discussion, and therefore the process. 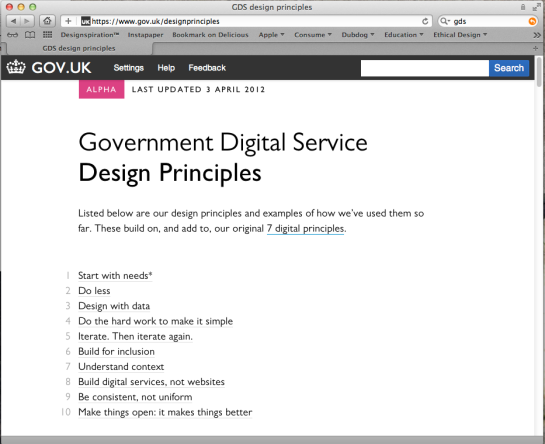 GDS have also put their thoughts and design beliefs centre stage of what they are doing by publishing a set of Design Principles. This manifesto has ideals at its core, ideals for making Government delivered digital services work for the end user; efficiently, transparently, functionally. Practicing Form Follows Function, the Bauhaus masters would be pleased.

Other than a blog, the big plan for GDS is to replace Directgov with Gov.uk. To advance this, GDS have set up a beta site for anyone to tryout and feedback to them. It puts cookies and a search engine at the heart of its operation, to make it as efficient as possible. The wider the demographic, and people with differing digital competencies, that trail this, the better. Only skewed results will come from design and Internet savvy audiences—so if your granny doesn’t go online much, get her to use it and give some feedback. And even if you can’t be bothered to give feedback, just by using the site, you will automatically be feeding back by your actions, as one of the GDS design principles is to design with data.

This is an exciting design led project, especially one that could be considered for such potentailly dry subject matter. So, while I’m on the verge of booking my tickets for the Bauhaus exhibition, I don’t believe we can afford to write off idealism in design because we only relate it to a specific timeframe seen through the blinkers of design history teaching. Today, tomorrow, yesterday; all are equally important if we want to engage people with design and further any discussion about its importance to society. However, the trouble with design history and its attempts to engage non-designers is that it is far too often stuck in the past.