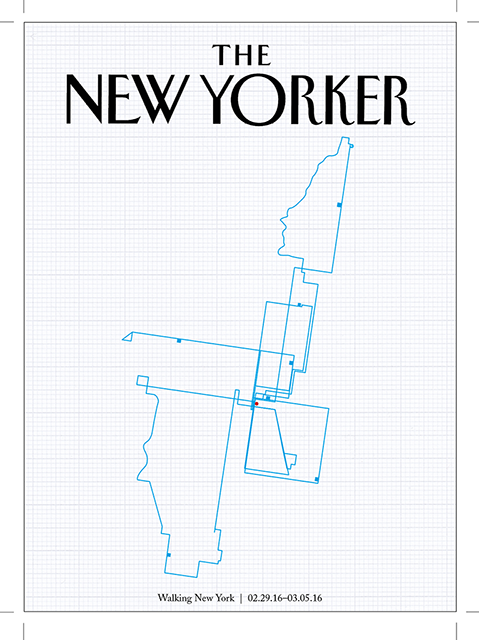 For the UCS Graphic Design trip to New York at the beginning of March, Russell set students and staff the challenge of producing a New Yorker cover that responded to their time in the city.

I had made no plans what I was going to do for the project before I went but I started drawing my walks around Manhattan from memory every evening. I didn’t attempt to draw these to any sort of scale, nor did I refer to any map. In creating these drawings it quickly became obvious that these would work for my New Yorker cover submission.

The maps represent all walks I did over the five days, typically two a day; one during the day and the other in the evening. The evening walks tended not to stray very far from the hotel we were staying in on 7th Avenue opposite Madison Square Gardens, (the red dot). The top of the map stops at the Guggenheim and the bottom in SoHo. I resisted including the boat trip around the island I took, as it wasn’t a walk, although there are a couple of bus journeys represented as these were routes to, or back from, walks I did.

Once back home I redrew the separate maps into a single record, and then scanned it and redrew it digitally in Illustrator. I did trial using a different colour for each day, but decided that a singular approach worked better and unified the whole piece. I tried tearing the graph paper to the shape of the island, but felt this gave a scale reference and detracted the emphasis from the memory-map.

This piece now forms part of an exhibition alongside student work at UCS, check out the Graphic Design course Facebook page for photos of other submissions here and here.

Scroll down here to view a couple of posts I’ve written about the trip with accompanying photos, or check out my Flickr site.