A large corner of my loft is stacked with vinyl records, mostly 12″ LPs, but there is a smaller pile of 7″ singles. They are going to stay there, save for the odd time I want to change the artwork in my three album-art frames that deck our landing. It is fair to say I haven’t jumped on the supposed vinyl revival—there’s already enough nostalgia in the world, I don’t need any more.

What I do miss about vinyl is the sleeves, hence my love of my album-art frames. Unfortunately 7″ single sleeves were never quite as explorative and there are few I can recall that deserve being displayed; a couple by The Clash, Sex Pistols or The Smiths maybe, but generally the design of 7″ single sleeves wasn’t anywhere as near as engaging as their LP counterparts, being more of a disposable commodity. But that’s certainly not the case with the recent Secret 7″ exhibition at Somerset House that I accidentally stumbled on last week when visiting Pick Me Up 2015. Secret 7″ is a project in its third year that chooses 7 tracks and presses each to 7″ vinyl. The organisers then invite designers and artists to interpret the tracks as they see fit and submit a cover, displayed anonymously, which the public can then buy for £50 apiece. All money goes to charity, and this year the chosen beneficiary is Nordoff Robbins, who are dedicated to transforming lives of vulnerable children and adults through music therapy. Like similar secret postcard projects, you don’t know whether you are buying a future collectors’ piece by a famous creative, or something whipped up by someone’s 5 year old daughter, (which could equally be a future collectors’ piece, of course). 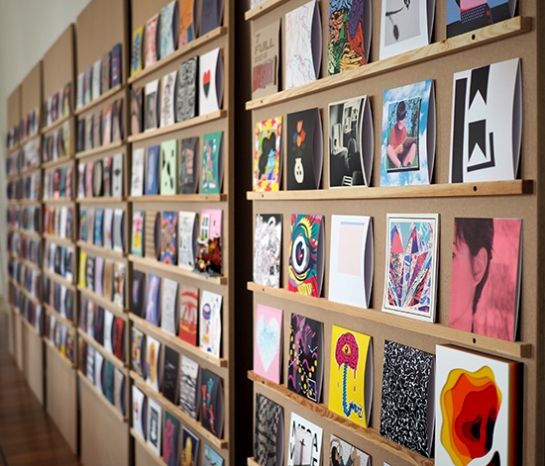 It is interesting to browse the racks not knowing who produced what and trying to guess the track. Many are clearly ‘just’ artworks that make no attempt to represent or link to their musical content. The fact that no title or band name is displayed obviously separates these sleeves from a standard 7″ sleeve—while some designers of commercial records have previously and deliberately not listed a band or track title on a cover, it is still the case that the vast majority of record sleeves do have this information adorning them, as obviously the reason d’être of the 7″ single from a record company’s point of view is to sell as many units as possible. But seeing so many sleeves displayed in one place with no typographic indication of band or title, I felt does reduce this exercise, in some cases, to appealing to an artist’s vanity and results in purely aesthetic outcomes rather than embracing communication—much like Pick Me Up, I felt there was a fair amount of style over substance. Regardless, taking a standard form and asking a plethora of people to work within its confines does lead to some interesting and innovative outcomes.

I was personally taken with those creatives that had worked with photography, especially as the vast majority of the sleeves were illustrative. As a result, the photography pieces did tend to jump out to my eyes. 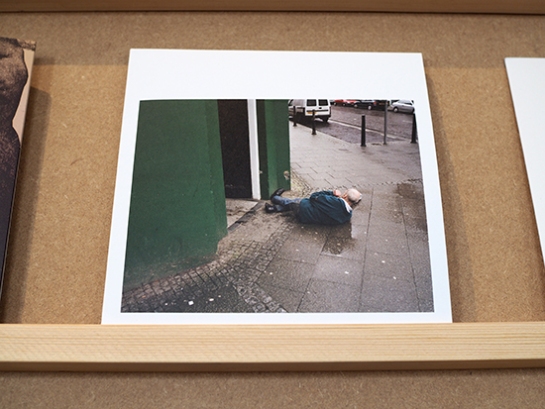 Alongside the rows and rows of sleeves, seven designers were asked to create a bespoke poster for one of the 7′ tracks chosen. These posters were also available to buy for £50 but limited to a 100 print run and included submissions from Erik Spiekermann, Craig Ward, Spin, The Counter Press, Peter Bankov, Felix Pfäffli and Bread Collective.

Unfortunately I’m writing this post on the last day the exhibition is open. However, the sale of the sleeves doesn’t start until tomorrow, 4 May 2015, so there’s still a chance to grab a 7″ single sleeve and give money to a good cause. Go to the Secret 7″ website for more details. 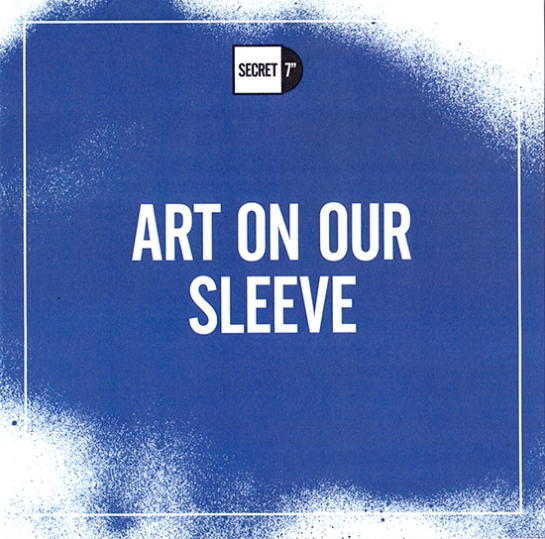 And while on the subject of singles: