For the last few years I’ve set a short project for my graphic design students to declare what they believe to be a design classic. The purpose of this exercise is for them to think about measurable, objective criteria when judging a piece of graphic design rather than instinctively stating they ‘like’ something. As an educational rationale I’m less interested in what they believe to be a ‘classic’, and am aiming more at getting them to have to justify their opinions using a well reasoned argument backed up by research and a critical analysis. 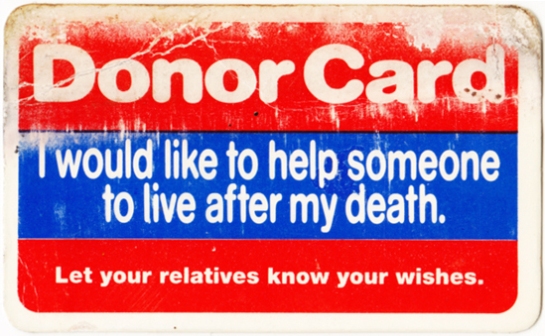 The rounded font disarms what is a direct and to-the-point statement—”if you find this when I’m dead, then go ahead and use my body for whatever you need because I don’t need it anymore!” The colour scheme is deliberately attention grabbing, helping anyone going through someone’s wallet in the unfortunate event of their death to find it as it is immediately visible. The fact that it has become an iconic piece of design, (one measure of something being an icon I would argue is mimicry—just Google ‘donor card’ to see many spoofs and détournements), means that its recognisable form is cemented in a doctor, nurse or paramedic’s mind’s eye. It is certainly distinct from many other cards someone would carry in their wallet or purse.

Death is not an easy topic for everyone to talk about. And while these cards aren’t trying to be over friendly in their styling, as this would diminish the seriousness of the situation, they do make a sensitive subject approachable, which is no easy thing to do—these cards don’t flinch from the reality, but they do offer some hope.

I’ve had the card above for a while now; its tattiness making it look a tired and in need of replacing. But I dare not throw it away as the newer variety are such a poor substitute graphically. 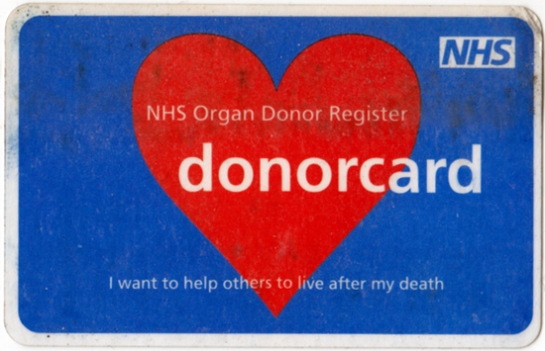 While I’m unsure whether the version pictured above is the most recent version, it is a poor piece of design in comparison to the original. Any mention of death has been relegated to such a secondary piece of information and rendered in a much smaller typeface that it almost appears cursory and timid, as if to say: “let’s not really discuss what this is about”. The off-centred title is visually awkward, not to mention a strange choice when everything else, (except for the NHS logo), is centred. The lowercase characters, along with the drawing together of the words ‘donor’ and ‘card’, I hazard a guess, is an attempt to create a visual identity for the card. But unfortunately this just looks like it is trying too hard and comes across as a gimmick. Finally, the heart symbol is misleading; the NHS are desperately in need of kidneys, corneas, lungs and livers as well as hearts, so it isn’t exactly a fitting icon.

I carry one of these newer cards in my wallet as well, just in case the original isn’t seen as an official declaration anymore, but it can get lost in amongst the array of other cards have, looking more like a store loyalty card by comparrison. This fact, above all the other criticisms I’ve stated above, is the most serious flaw in its design. In contrast, the original had been considered as a functional item—with the words ‘Donor Card’ being prominent at the top of the rectangle. This makes it quickly readable without pulling the card, along with many others, out of its holder by someone searching for identification in an emergency. Below is a photo of how it sits in my wallet, clearly in view and unmistakable.

Completely by coincidence, this morning I received a letter from the DVLA telling me that I had to renew my driving licence and supply a new photograph. On the enclosed from was a box marked Organ Donation where I could declare my wishes as to what I’m happy to donate after my death. These details are then logged on the NHS Organ Donor Register. 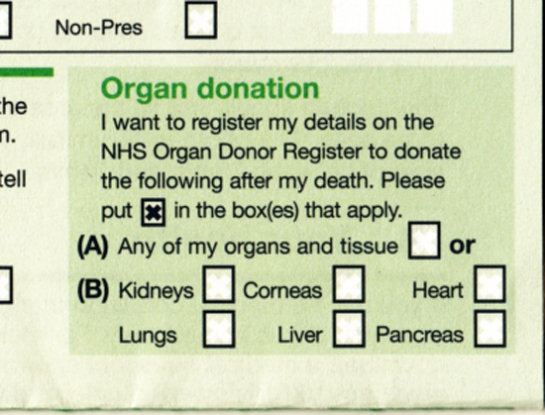 I have already signed up on the national register, but this does not make carrying a Donor Card any the less necessary, as in an emergency, and with so many people on waiting lists for an organ, time is of the essence. Carrying something that indicates your wishes is very immediate and can give the go ahead for a potentially life saving proceedure without the need to access an online register, which in many scenarios could be problematic. This reinforces the need for a Donor Card to be designed to be recognisable, obvious and immediate. The original version is all of these.

One other attribute the original Donor Card has is that it serves as a badge of honour. I’m very proud of carrying my card, and I’m happy to prick other’s consciences if they happen to glance at my open wallet while at the till in the Co-op. If it prompts anyone who doesn’t carry a card to do so, then I’m pleased to have played a role in this. The iconic nature of the original design, with its longstanding recognisable typography, has the chance to do this. The later version is anonymous and hidden from sight unless carried in a window pocket in a purse or wallet, and therefore has a much harder job to do and is therefore less likely to be effective.

All these considerations make me declare the original Donor Card a design classic, and I hope that the NHS reconsider the design of the current card and re-employ the stylings of this classic.

This post was written without being able to find out who the designer was of the original Donor Card, nor when it was first designed. If anyone reading this can supply this information, I would be most grateful and will update this post accordingly.