It is interesting to think why a signature on a piece of work attracts people to part with more money for an item than that item would otherwise be ‘worth’, particularly for work by graphic designers.

This week UCS Graphic Design and Illustration students held an International Design Auction of work they had, not to put too finer a point on it, ‘blagged’ from well known graphic designers and illustrators around the globe. The event was packed with people wanting to get their hands on (in the main) mass produced items that had been made unique with the quick squiggle of a fine liner.

I am very happy that I got the Tom Gauld piece I won, (pictured above), and I had earmarked this to bid on because it was a one off piece original artwork, (you can still see traces of tippex on it), and because I’m an admirer of his work. While the signature authenticates this as an original, had it been a signed print I would have been less interested. I also bid on other lots because I actually wanted them, such as Sam Potts’ poster celebrating 100 years of the Tour De France:

However, I got carried away and bid on some items purely because they had a signature, such as the Johnson Banks ‘Power Of Creativity’ poster and a Karlssonwilker book that carried an invite to visit their New York studio, (but alas, without the addition of plane ticket). Don’t get me wrong, I like the work, this wasn’t some act of design star worship, but I now question whether I really can justify the purchase of something I wouldn’t have otherwise have wanted to actually buy and would have been happy admiring from a distance. I can categorically state that it was the lure of the signature that got me! 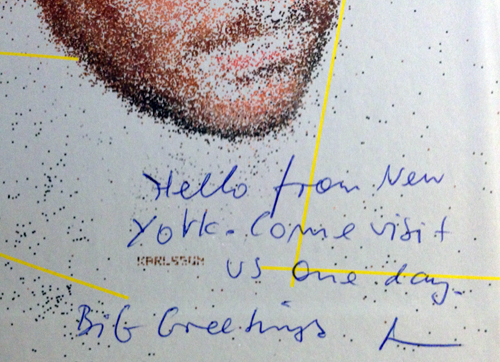 Signing work is a controversial subject for some designers. We produce work that is reproducible not a one-off, (in the main), and a signature can lend the self-indulgent and egotistical air of pretension that dogs fine art. So to mark something out as ‘special’ goes a little against the grain for some in our trade. When design students last year ran the inaugural International Design Auction at UCS, I approached Javier Mariscal’s PA to see if he would sign a children’s Camper shoe box I owned, (it is adorned with some of his illustrated characters). The answer came back that Mariscal was not happy to do this because he was a designer, not an artist. Likewise, Barney Bubbles, record sleeve designer to Ian Dury and Elvis Costello et al, famously never put his name on a piece of work, not wanting to draw attention to himself and seeing the musicians his work showcased as its reason for existence. He was not in the game of self-publicity, and very much saw that graphic designer is a service industry.

But while I have strong sympathies with such beliefs, which at their heart, I believe to be political constructs of anti-elitist leanings, I can’t help being attracted to the ‘specialising’ of an item and the promotion of ‘ownership’ that such activity breeds. Over and above what I bought at this week’s auction, I also own a limited edition poster by Build celebrating 50 years of Helevtica signed by Michael C Place and a poster by Experimental Jetset that is collectively signed ‘EJ’ by the threesome, (both of these were competition wins). And recently I bought a poster by Unit Editions advertising their monograph on Ken Garland, signed by the man himself.

The Garland poster is a little odd in some ways: the poster wasn’t designed by him, and it is advertising a book that he didn’t write, so it seems slightly at odds with his self-effacing manner. Yet when Unit Editions posted on Facebook they were selling these as a limited run of 50, I had a knee-jerk reaction and bought one on the spot, being a fan of both Garland, and Unit Editions output.

Maybe a less aggrandising way to approach the concept of designer signatures is one I found by the great Paul Rand. On buying a copy of the children’s book he wrote and designed with his wife, ‘Sparkle and Spin’, I took a sneak peak at what lay behind the dust jacket, only to find Ann and Paul’s signatures printed onto the hard case (which was completely different to what the dust jacket portrayed):

This book feels just as special to me as any of the uniquely signed books or posters I own, because it is a little secret that you have to discover. The Rands, I believe, thought this hidden gem adds a personal touch to the piece, despite the fact it is mass produced. If I’m right in this assumption, it worked on me.